it’s two miles long and helps power the train between amsterdam and paris. check out the extended aerial fly over shot below. (but first hit mute because the music is so bad it might make you think this is a really bad idea.)

as the guardian.uk article says

“For train operators, it is the perfect way to cut their carbon footprints because you can use spaces that have no other economic value and the projects can be delivered within a year because they don’t attract the protests that wind power does,” said Bart Van Renterghem, UK head of Belgian renewable energy company Enfinity, which installed the panels.

from good.is via the guardian

according to this article, someone has finally figured out that if you attach a giant kite to a giant ship, you save on fuel. heaven forbid someone in the long haul shipping industry ever run across a kite-boarder or a sail boat… wind, totally mystifying, right?

let’s look at the numbers. apparently, freight accounts for 25% of the US’s transport emissions, which is 8% of the country’s total emissions, and one kite on one ship could decrease fuel consumption up to 35%. Do the math (?) and that amounts to, and i quote:

A United Nations (International Maritime Organisation) study found that up to 100 million tonnes of carbon dioxide could be saved every year by the broad application of SkySails’ technology on the world merchant fleet, SkySail said. 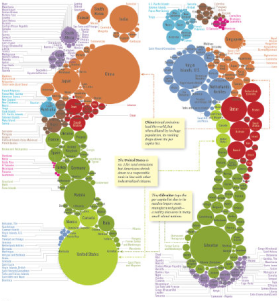 well, if i may draw your attention back to the carbon footprint graphic, you will see that the US, as a nation, ranks #2 in (worst) carbon emissions in the world! that makes 8% a not-so-very insignificant number… in fact that 8% is 2025 million metric tonnes (according to here), so a decrease of 100 million would, voila, be about a 5% reduction in all transportation emissions, or 0.4% in total emissions, based on the 2007 numbers.  impossible?! (… well maybe, someone want to check the units on that one?)

Oh, and fyi, other ways to decrease fuel consumption on a ship … go slower, among other things…

so, back to the kite, SkySails. did i mention that it’s run by a computer which controls the flight path. pretty. fancy. kite.

you may have seen this on Gizmodo, but if not, fyi, helsinki has become the first city with an underground master plan. Thanks to their constricted urban landscape (sea and existing buildings), they have decided to mitigate sprawl by digging deep and “going green”. This of course, made possible, by the shallow layer of hard bedrock located right below the city. They even cool computers with sea water, and use the heat for houses. Smart Fins…

leave it to the japanese ….

the microbial fuel cell and how insects can power the future:

and what about carnivorous furniture?